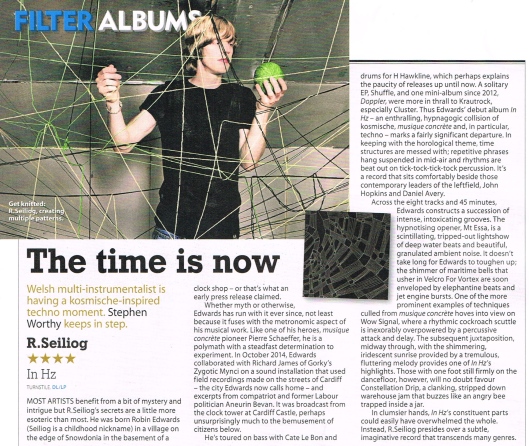 “Bold and beyond brilliant, In Hz is discombobulation for the soul” Q 4*

“R.Seiliog presides over a subtle, imaginative record that transcends many genres” Mojo 4*

The One Album You Should Hear This Week The Guardian

“It’s a record that sits comfortably beside those contemporary leaders of the leftfield, Jon Hopkins and Daniel Avery” Mojo 4*

Inspired by Pierre Schaeffer’s Solfège De L’Objet Sonore, alternative tunings and the alchemy of resonance. Could In Hz’s perplexing sonic tapestry be the outsider de-tuning to the primordial Om?

R.Seiliog has built a formidable reputation from live gigs across the country; he recently remixed the title track of Manic Street Preachers’ album Futurology at the band’s request. In a recent interview with the Quietus, Manics frontman James Dean Bradfield said 2013’s Doppler “really gave me inspiration when we were finishing Futurology… it’s just one of those records that I absolutely love.”

Turner Hall are working on In Hz and R.Seiliog’s UK gigs.